I'm don't normally post information about sales here. But these are a couple of good deals. And, in the interest of transparency, I can earn a commission on one of the two. But I'm not posting for that reason. I'm posing because it's a good deal.

What brought this up is I had a conversion this week with someone who is interested in streaming. I recommended a Fire TV Stick 4K, or a Roku stick. At the time, I didn't know about this first deal.

This is a good price. I don't have a link, because the deal isn't until later today, and there is no link. Just go to the Walmart Website, or your nearest Walmart store, and take advantage of this deal.

Walmart is (or will be, at the time this is first posted) selling a Roku device for $15. No, it's not a top of the line device, but it is a Roku streaming device, and it's a good price.

The device is listed as a Roku LE. That's not a standard name for a Roku device. Some years back, they brought back the Roku 1 (model 2710) as the Roku SE. They both were model 2710. They just renamed it for a sale. It appears they're doing something similar. This time, Roku is selling, though Walmart, a device called the Roku LE.

This one is white, and it looks to be a Roku Express. I suspect it's model 3930 (the current Express). Maybe it's some left over Premiere devices (model 3920) but I doubt that. 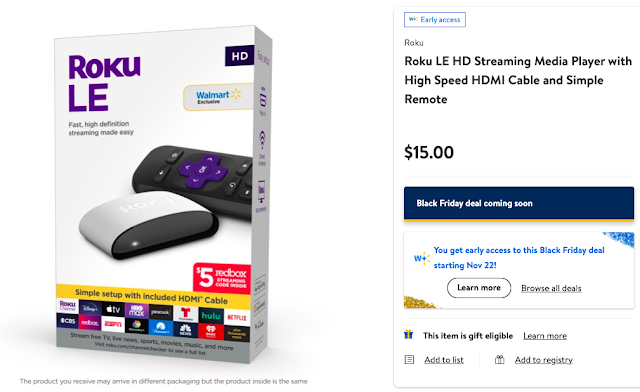 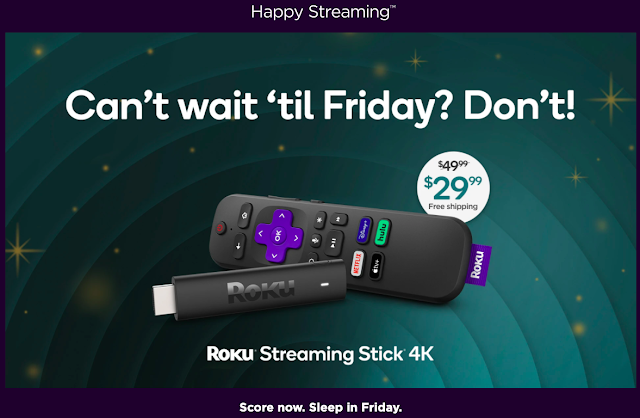 I think  that's a pretty good deal, too. This looks to be a good time to get a Roku if you're just starting out. The LE, even as a low end device, is still a good deal. And the price on the Streaming Stick 4K is hard to beat.

If you are looking to begin your Streaming Life, this is a good time for that. I've enjoyed mine for over a decade. I hope yours goes as well.

By DBDukes - November 22, 2021
Email ThisBlogThis!Share to TwitterShare to FacebookShare to Pinterest