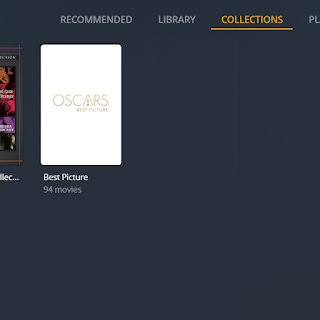 I've got a decent movie library, totaling 1,690 films. That doesn't include short films, cartoons, TV shows, and such. Part of my library consists of movies I just like and bought.

Wait. Did I just imply that I may have movies I don't like? Well, I do. Some, I didn't know at the time. I thought I would like them, so I got them, either on DVD (which I later ripped into my Plex library) or purchased a digital copy (which I later ripped into my Plex library). So, I found out I didn't like some of them after I bought them. But I'm okay with that. I gave the film a shot, and if I didn't like it, that's just how it is.

Along the line, though, I decided I wanted to include in my library certain collections. I decided I wanted all of the movies that won Best Picture at the Academy Awards. I checked my library -- it wasn't all in Plex at the time -- and found that I had a good number of them. So, I looked into getting the rest. And I did.

As of this writing, there have been 93 Academy Award ceremonies, and of the 93 films to win Best Picture, I have 94 of them.

Okay, now you're wondering if I just don't understand math. I do. But I also understand history, and I don't like when it's changed.

In the first Academy Awards ceremony, held May 16, 1929, there were two top awards for films given. Wings won the award for Outstanding Picture, while Sunrise: A Song of Two Humans won Best Unique and Artistic Picture. At the time, they were considered equal top awards. The next year, they did away with the Best Unique and Artistic Picture category but kept the Outstanding Picture award, and declared that Wings was the top film of the previous year, retroactively.

Sunrise actually received more nominations than Wings and more awards than Wings, and is probably a better film. Still, Wings is today considered the first winner of the Best Picture award by the Academy, and by most people. But not by me.

I feel that at the time, they considered the awards equal and both the top award. No amount of revisionist history will change that. So, I consider them both the Best Picture in that first ceremony. And they are both in my library. Of course, it really doesn't matter. I'd have Sunrise in my film library regardless.

Oh, and there were two Best Director wins that first year, too. There were separate awards for dramatic and comedy pictures. Like Outstanding Picture and Unique and Artistic Presentation, they were combined into a single award beginning the next year. Unlike Best Picture, they didn't retroactively reduce one of the awards.

But back on track, I didn't, but soon did, have all of the winners of the Best Picture awards. And, since I added those to my library, each year, I've added the new winners of the award. I haven't seen them all. Yet. I will. I just haven't seen the most recent. I've seen the older ones. In fact, I have some serious catching up to do. The most recent Best Picture winner I've seen is The Artist, and that was only a two or three years ago. I have a whole decade of Best Picture winners the catch up and watch. I need to get around to that.

By DBDukes - November 14, 2021
Email ThisBlogThis!Share to TwitterShare to FacebookShare to Pinterest