The problem with Chromecast 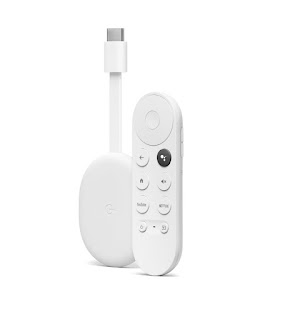 While Roku is my primary streaming device, I have a fondness for the Chromecast with Google TV (I'll call it "Chromecast" from now on, even though the device actually called "Chromecast" is a lesser device).

Recently, I added the Tablo Connect feature to my home by syncing my Chromecast to the TV antenna I put up at my mother's house. In cast you don't recall, that's the feature that allows me to watch TV from that antenna on another network. I'm watching TV at my house from an antenna at a different house.

Oh, and, since I've been using Chromecast more, I've used Roku less. And, the other day, I wanted to look at the updated Popcornflix app. On Roku, it was a quick and easy setup. But, with Chromecast, there was an issue. It wouldn't load on my Chromecast device.

Oh, yes, Popcornflix is compatible with Chromecast, but I had too many apps on my device. It indicated I needed to remove an app to add Popcornflix. I removed a couple than added Popcornflix. But I really didn't like having to do that.

I've been spoiled by Roku. Roku doesn't have a lot of on-board storage, but it doesn't really matter. If you run out of space on a Roku, it will remove the oldest app, in terms of how long ago you last used it, and load the new one. It will actually start with the oldest apps and remove as many as necessary until there is enough space for the new app. The old app(s) still shows on the device, and all devices, and if you go to launch it, it will load, removing what is now the oldest, if necessary. It's all behind the scenes. You can only tell it's doing it if you launch and app and you see the download counter.

But that's now how Chromecast works. It works like your Android phone does. You have to remove apps yourself if you need space. And that makes sense, since Chromecast is running Google/Android operating system.

This was an irritant. If it will be a long term bother, I don't know. After all, there are several apps I don't regularly use, so removing them isn't a big deal. But then again, I don't really use Popcornflix. I wanted to give it a try and see what I thought. But, while trying to load it, I had to switch gears and do some cleanup on the device. I didn't have to do that with Roku.

I'm not about to chunk the Chromecast by any means. But I am looking around trying to remember where I put the Fire TV Stick 4K device. It may be a better option for having Tablo Connect in my Streaming Life.

By DBDukes - November 01, 2021
Email ThisBlogThis!Share to TwitterShare to FacebookShare to Pinterest