If you're a cord cutter, or wanting to be, one thing I would suggest is getting a TV antenna. Depending on where you live, that can be an easy thing or a hard thing. For me, it was not easy.

I live around 40 miles (not less than, but not much more than) from the major TV towers that serve my area. Picking up a good, clear, consistent TV signal means an outdoor antenna for me. That may or may not be the case for you. So, how do you determine this?

There are a few of different Websites that are popular for this. I like different aspects of both, but found that, at least in my case, one give a more accurate picture of what I needed.

One that's highly recommended is TV Fool. It does a pretty good job, However, it underestimated my antenna needs. I tried an indoor antenna -- it called it a "set top antenna" -- but that didn't get me what I was after. 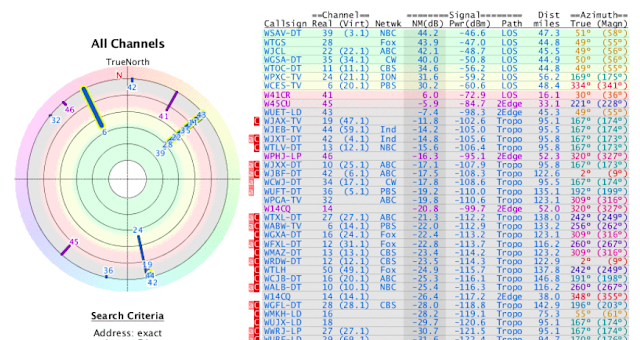 Another thing it didn't quite get right was the actual frequency of one of the Savannah station. It said WSAV is actually broadcasting on channel 39. However, the FCC says it's channel 16 after the most recent repack (which was a while back). So, the database isn't always up to date.

Another popular Website is AntennaWeb. It was a little more accurate when it came to telling me what antenna I needed. 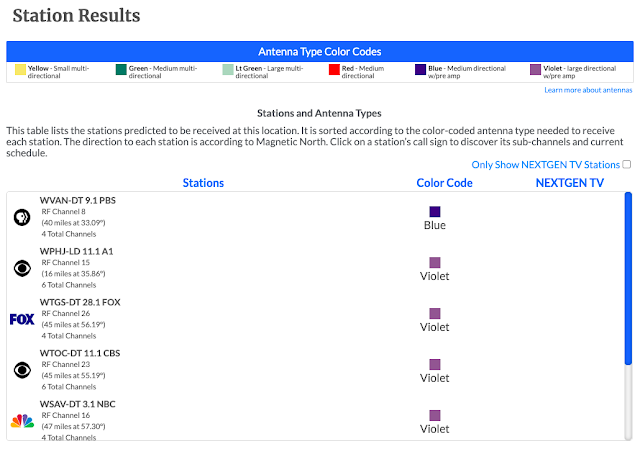 It also got the actually channel for WSAV correct. It actually overestimated for some of the channels. I did need a large antenna with a pre-amp to pick up WTOC, but not the other major channels. However, the larger antenna doesn't hurt.

I had actually purchased a smaller antenna and was able to get the UHF stations without any problem. But, WTOC, being a VHF station, only came in with difficulty. Now, I will say that it was good most of the time. But, every minute or two, there would be a hiccup. The large antenna and preamp solved that.

The other Website is the FCC. They actually have a pretty good map and information about the station, but make no recommendation about an antenna. After all, it's the stations they oversee, not the receiving antennae. 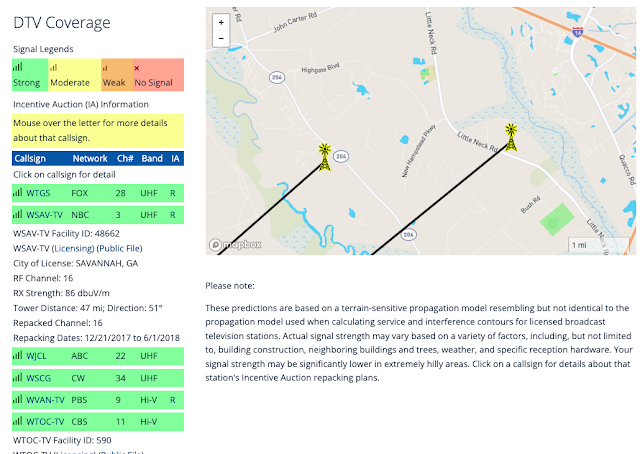 Note the map. I blew it up on two of the stations so you could get a view of what that looked like. It's actually the best for locating the TV tower, in my opinion. As for picking an antenna, it's not that great, but then again, that's not what it's trying to do.

So, what do I recommend? All of them. None are perfect. But using them all, you can get a lot of good information that helps with troubleshooting issues. And honestly, I would expect issues.

If you want to get the signal to more than one TV? Well, that's a whole 'nuther thing. This will help you know what antenna you need to get a signal to a device. To get it to more than one device is something we'll talk about later.

And you thought your Streaming Life would be simple. Well, life isn't. No matter what kind of life.

By DBDukes - November 24, 2021
Email ThisBlogThis!Share to TwitterShare to FacebookShare to Pinterest