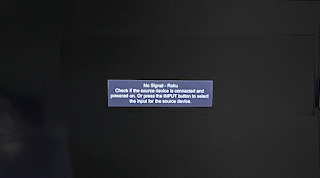 My Roku Ultra died. It's the second Roku I've had go bad in nearly 11 years. And, the other one was a Roku Ultra, too.

Until recently, it was my primary Roku device. When I replaced my defective sound bar with a Roku Streambar, the Ultra was assigned to a secondary TV. Well, this weekend, I went to use it, and I couldn't get it to work. It had power, but there was no output to the TV. I changed HDMI cables and ports, but it wouldn't work.

I was able to get a Roku Premiere+ (the Express form factor, model 3921) running, so the TV has a Roku on it, but my Roku Ultra isn't working.

In 2017, a Roku Ultra (model 4660) I had went bad, not long after I got it. Roku replaced it without issue. The device worked well for another four years. That is, until this weekend.

I don't think I'm going to replace it, at least, not yet. The Streambar works well, and the three-year-old Premiere+ works well. This is the first time since I got my first Roku that I haven't had a top of the line model. Next time I need a Roku device, I will get one, but using some of my retired stock works for now.

I'm certainly not soured on Roku by this. The device is four years old, and that's not too bad. I've never used an Amazon Fire TV Stick that long. I get fed up with them well before then. I have Apple TV devices, if I need to use them. But, I do prefer Roku, but it's not necessary that I run out and replace this one with a new one.

I have enough streaming devices, including some that do work very well, to keep my Streaming Life functioning just fine.

By DBDukes - November 16, 2021
Email ThisBlogThis!Share to TwitterShare to FacebookShare to Pinterest