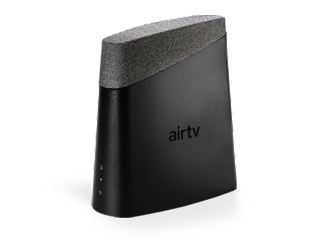 Yes, I covered Tablo vs Air TV before. The outcome of that was that I like both Air TV and Tablo. They are both good devices and both work well.

I manage a couple of household locations and set up Air TV at one and Tablo at another. I then switched out the Air TV device and replaced it with Tablo because I like the interface better. So, what to do with the old Air TV device? I finally figured out what to do with it. I use it.

I got to thinking about it recently. Perhaps you'll recall that I had an issue with Tablo recently and had to reboot and re-add the device to the network. That's been bothering me. Plus, not having Air TV running any longer means that I can't keep with with changes or improvements (not all change is good) to the service.

So, what to do? Well, why not run both? I only have the one antenna, but a splitter will take care of that little issue. And that's what I did.

I now have both Air TV and Tablo devices connected to my antenna. I re-scanned to ensure that I still get a good signal, and I do. Both devices pick up the same channels. I limited both to the same 26 channels, as other six channels don't have a signal I'm comfortable with.

So, splitting the signal didn't adversely impact the channels I can receive by either device, and now I'm running both devices.

Tablo is still my preferred app, because I like the interface better. But, with football season approaching, and the likelihood that I'll subscribe to Sling TV for the college football season, I'll be using the Sling TV app anyway. With Air TV integrating into Sling TV's menu and guide, I will be able to switch from ESPN or SEC Network to CBS or Fox over the air from within the same app.

Yeah, maybe this is overkill. But, on the upside, I'll be able to keep abreast of changes to either app or service. If I can find something that helps others out and makes their Streaming Life better, it's a good thing.