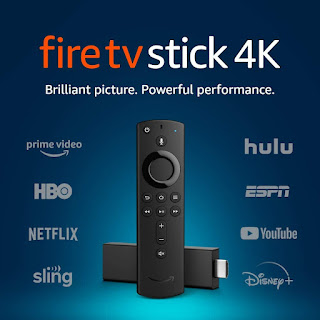 I've not been a fan of Amazon's Fire TV devices almost since the devices first launched. To be clear, I have purchased many over the years, and have given them all away. Until now.

Here have been my complaints about the Amazon Fire TV devices:

My complaints are now tempered ... somewhat.

The interface is not really any better. I suppose the fact that more and more devices do this makes it not stand out as much.

Roku is the least intrusive, although the ads on the menu screen do promote Roku devices and services. Chromecast with Google TV does promote Google a lot. Apple TV is not as obnoxious as Chromecast or Amazon, but that's because Apple is more subtle, but still promotes itself as much; they're just better at it.

So, having accepted that it's going to happen, I'm putting less emphasis on that aspect. But that still leaves the underpowered device as an issue, and that's a big deal.

I have to say, I've been very happy with the Amazon Fire TV Stick 4K insofar as responsiveness is concerned. Had I purchased a lower end device, I might not feel this way, but with a sale on the top end Firestick, I got a good device.

Let me state that some years back I did purchase a Fire TV box. Of course, it was in 2014 -- I just looked that up and was surprised it was that long ago -- but comparing it against my, at the time, Roku 3, it was an inferior device. So, I stand by my complaint about the underpowered device. Well, until now.

I gotta admit that the Amazon Fire TV Stick 4K is a good device. There used to be a huge gap between my number 3 and number 4 device, with Amazon being number 4, far behind the others. That's no longer the case. Amazon, at least the Fire TV Stick 4K, has risen in my eyes.

I've used the Fire TV Stick 4K almost exclusively for a couple of weeks. I have no complaints over the device itself. It works well, and joins the other devices as a recommended device.

Will I convert to Fire TV? No. But it's now an option I'll have on at least one TV at all times, rather than something stuck in a box somewhere, like I've done with my TiVo Stream and Onn devices. While it won't be my top device or go-to device, at least not yet, it's now a part of my Streaming Life. If you choose to make it part of yours, it's a good decision.

By DBDukes - August 20, 2021
Email ThisBlogThis!Share to TwitterShare to FacebookShare to Pinterest