I've been a big fan of Plex lately. Well, for a few years, actually. When I started streaming, many of my digital movies were purchased via iTunes, and I used iTunes to stream them locally. But, I decided to expand beyond that functionality and rip out all my digital movies and DVDs and stream them via Plex. I looked at a couple of different ways to do this, but I bought in to Plex as the way to go, and I'm glad I did.

I've liked the updates they've made to Plex, including adding live streaming and on demand, but to me, the bread and butter has been the local streaming -- and remote streaming. I normally only use Plex when I want to watch my local content, which is sometimes a lot, sometimes not.

The other day, I launched Plex and it looked different. And a little more so than I expected, but not enough to make me wonder if I had launched the wrong app. So, what was going on? Turns out Plex has introduced something they call "Modern Layout."

First, we explored a large number of layout options, eventually landing on a new “Modern” layout that would showcase artwork from the title and provide some additional context when a poster is in focus: genres, parental ratings, and brief synopsis of the title without having to first click. We combined this rich data with a background color extraction process with a goal of providing a more immersive and streamlined experience when you’re sitting down at the couch and trying to figure out what to watch. Since posters generally have the movie or show title contained in the artwork, this layout also forgoes duplicating the (often truncated) text titles and additional information below the poster in favor of displaying that information in the “inline metadata” section at the top. Importantly, we wanted to involve the Plex community in the process and invite you into the lab.

So, what do I think? Actually, it's fine. I'm not one who embraces change for the sake of change. I like familiar and comfortable. But, I don't shy away from improvements, either. And, I like the new Plex layout. 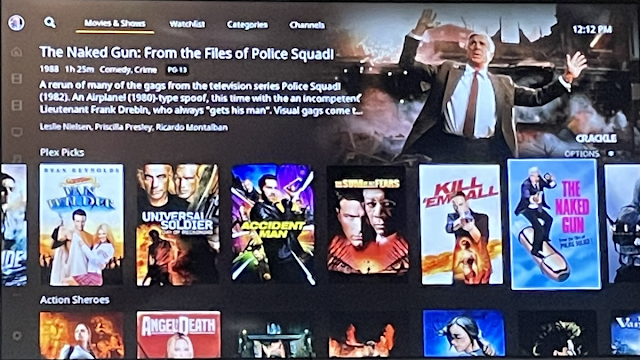 Is it better? Really better? Well, that depends on the person. I happen to be one that likes it. Part of the reason is that it's not a huge change. Not really. There's a lot familiar to it, not a huge change, but enough of a change to make me like it better.

It's a welcome addition to my Streaming Life. Perhaps to yours, too.

By DBDukes - August 24, 2021
Email ThisBlogThis!Share to TwitterShare to FacebookShare to Pinterest