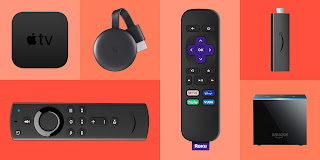 Sticks are a popular way to add a streaming device to a TV. I have streaming sticks by Roku and Amazon on my TVs, as well as Google Chromecast, on different TVs, but on my primary TV, my main way of watching isn't with a stick. However, I do use them on occasion. All of my Amazon Fire TV devices are Fire TV Sticks, for instance, so when I decide to use Amazon Fire TV, I'm using a stick. I have no issues with sticks. They're great.

One thing that crops up often in the Roku support forums is odd behavior from a Roku stick, and it turns out that the user is powering it from a USB port on a TV rather than with the included Roku power supply. The other thing is that for some overseas locations, Roku doesn't even include a power supply on some devices, so you have to use the USB port on the TV. And, Roku has included instructions on how to use the USB port on the TV to power the stick.

That means that Roku says, "Sure, go ahead, power your Roku device with the USB port on your TV." But I say otherwise.

But this isn't just a Roku thing. Amazon Fire TV Sticks shouldn't be powered by the USB port on the TV either. I'm pretty knowledgeable about Roku, more so than I am about Fire TV. But I'm pretty good with Fire TV, just better with Roku. So, is my suggestion that you shouldn't power your Fire TV via the USB on your TV not valid? Or not as valid? No, my suggestion is right. And one Fire TV expert agrees with me.

Elias Saba at AFTVNews.com says to not use the USB port on the TV to power a Fire TV stick.

The main reason not to use the USB port on a TV to power a Fire TV Stick is that it greatly increases the risk of damaging or “bricking” your streaming device. I know there are going to be thousands, if not millions, of people who will be quick to mention that they have been powering a Fire TV Stick with their TV’s USB port for years without any issues. That’s fine and I believe them because I’m not saying doing so will absolutely damage the Fire TV Stick, but it does make it much more likely for something to go wrong.

He has a lot more to say about it, and it's all good advice. He even added a new column for this year emphasizing the advice. I'm glad to see others on other platforms confirming my experience and suggestions.

Like real life, your Streaming Life can benefit from the experience of others. And maybe their (including mine) experience will help yours to be better.