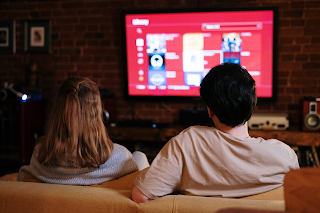 There are two main ways to stream content: live and on-demand. You probably already knew that. If not, you just never took the time to think about it. But, it's really obvious once you ever do think about it.

In the old days, you could only watch something as it became available. A new episode of I Love Lucy or Star Trek or Cheers would be watched when the network aired it. Or you might watch the baseball game of the week as it happened. That was how you could watch TV.

Eventually, VCRs came available and you could record your soap operas for watching later. That meant there were two ways to watch TV.

Think about that for a minute. In the 1960s, you would watch live TV. In the 1980s, using a VCR, you could also watch last night's shows today.

Now, in 2022, you can subscribe to a live streaming service and watch live TV, or use the DVR feature, or the on-demand feature, and watch last night's shows today.

See the difference? The dates on the calendar changed. That's it.

Hmmm. Still not much difference. The change is the method of watching TV, but not really the way we watch it. Instead of cable, we use an Internet connection to stream TV.

But is there really another way to watch TV? Not another method -- antenna, satellite, cable, streaming are simply methods of watching TV -- but a different way. I'm not sure there really is. Stuff is either happening right now, or it happened already. It's a TV, not a TARDIS. We really can't watch TV any other way. Or maybe we just haven't figured it out yet.

I prefer streaming to other ways, but I don't just stream. I have an antenna, and when I use the antenna, I'm doing the same thing in 2022 that I used to do in 1962. I'm watching live TV over the air from an antenna. There are a lot more channels, but it's still over the air free TV. I like free.

I also like streaming on-demand content. I can have a huge library of movies and TV shows without a bunch of VHS tapes taking up a room full. So, while my TV habits went from watching live in the 1960s, adding watching on-demand (VHS recordings) in the 1980s, to ... well, live and on-demand in 2022. I just have a lot more stuff from which to choose. And that's the real difference. That's what makes my Streaming Life enjoyable.

By DBDukes - January 19, 2022
Email ThisBlogThis!Share to TwitterShare to FacebookShare to Pinterest