Roku has launched a new "Live TV" item on its menu. It's similar to the Live TV section of Amazon Fire TV, but there are some differences, as you might expect. But not many.

The main difference, really, is that Fire TV will try to autoplay selections for you while you are reading the description of the content. There are settings that will turn some of this off, but that only works on the items at the very top of the Live TV section, the Featured section. When you go to the other sections, Fire TV autoplays. I hate that. Roku doesn't autoplay, which is something I prefer. So right off the bat, Roku wins the comparison.

Roku Live TV focuses primarily on The Roku Channel. All of the content you can access directly from the Live TV menu is from The Roku Channel. There are sections of content that are actually shortcuts to Roku apps. Of course, since Roku calls apps by the name "channels" it's difficult to tell if this is a live TV channel, or an app. The way to tell is the actual live content from The Roku Channel has a "LIVE" indicator on the thumbnail. If it doesn't have that, it's either an app, or a section of The Roku Channel.

And if it seems I've mentioned The Roku Channel a lot so far, that's because the Live TV section is really heavy into The Roku Channel. Too heavy, I think. Let me offer an example. 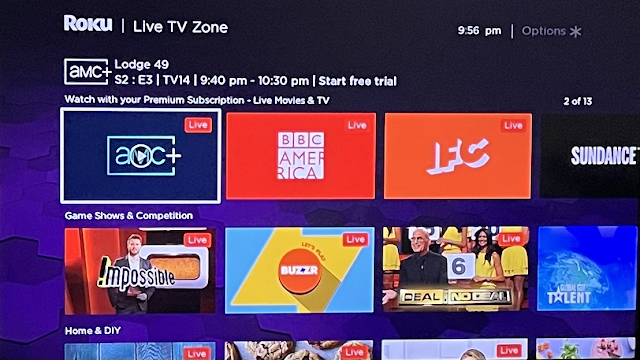 I can see this causing some confusion and frustration for Roku users. What should happen is an additional item, both in the Roku Live TV section and in The Roku Channel for "I already have a subscription" that launches the appropriate app.

Which brings me to another thing about the Live TV section. Roku doesn't just list apps you have installed on your account when it lists live TV apps. If you have the app installed, it launches the app. But if you don't have the app installed, it will install it for you. If you have your Roku configured to require a PIN to install apps, it will prompt you. If you don't have your settings to require a PIN, it will simply install the app.

One other thing about Live TV: I don't see a place or setting for OTA content. If you have an antenna, it's not accessible within Live TV. At least, not on a standard Roku device. I need to see if the implementation on a Roku TV is different. And, it doesn't pull in content from Tablo or Air TV, or from what I can tell, any other apps that use antenna content.

Still, overall, I live it better than the Amazon Fire TV implementation, if for no other reason, the autoplay that Amazon won't let me turn off. Despite the things I don't like about it, overall it's good, and I see it becoming a part of my Streaming Life.

By DBDukes - January 13, 2022
Email ThisBlogThis!Share to TwitterShare to FacebookShare to Pinterest