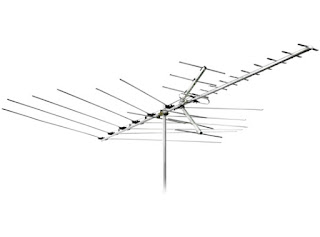 If you're a cord cutter, or thinking of becoming one, an option you should consider is getting a TV antenna. Most people in the USA live close enough to at least one broadcast tower and could pick up TV signals over the air. That's free.

A long time ago, when I was just a wee lad, that was the only way to watch TV. We had a TV antenna pointed toward the TV towers in Savannah, and we'd watch the stations from that city. It was the closest place that had TV signals. Next closest was Jacksonville, Florida. Or maybe Charleston, South Carolina. But we usually watched Savannah stations. And we used an antenna because that's how you watched TV.

Later, a company ran cable in our area, and we eventually switched over in order to watch the newer channels that were available beyond the Big Three networks of ABC, CBS, and NBC. Fox and CW came much later.

Cable became big. Really big. It made Ted Turner millions, and Braves fans out of many people across the country. It was the part about making millions of dollars that people latched onto. Cable was big. However, the whole time, over the air TV still worked. Many people didn't use it though. Cable was expensive, but convenient.

The increase in streaming services has put a huge dent in cable, and is partly responsible for people remembering, or finding out for the first time, about over the air TV. What was an old market, an only market, was resurrected, and became a hot new market again. And what happens when a new market emerges? Somebody wants to take advantage of it. 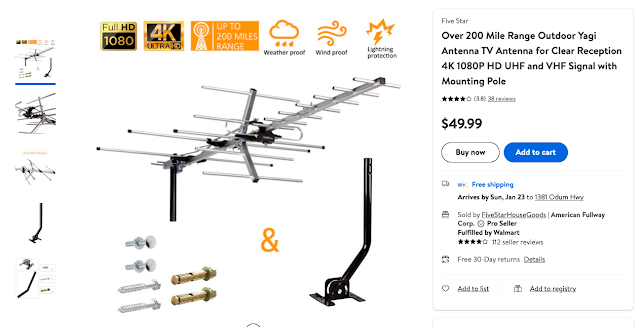 Let me tell you a secret. They're lying. Here's why I can tell you they are lying: the earth is round.

Try this experiment. If you can't do it in person, do it in you mind. Or read this article. You'll see what I mean. Go to the ocean. Stand on the beach and look out over the ocean. See the horizon? Where the sea meets the sky? That's a little over five miles away. Well, for me it is. If you're taller, maybe a little more, and if you're shorter, a little less.

There are other factors to consider as well. Ground clutter -- the natural or man-made obstructions between you and the object (TV tower, in this instance) -- can negatively affect the signal. The antenna itself can make a difference. All antennae are not created equal. Also, all TV signals are not created equal.

TV stations that broadcast on channels 2-6 are VHF low, channels 7-13 are VHF high, and 14 up are UHF. You need a different antenna for each of those bands. The good news is that you can find an antenna with all three in one. The key thing is, every antenna has all three combined.

Another thing is that not every TV station actually broadcasts on the channel you think. The actual channel may be different than the virtual channel. Let me use my local stations as an example.

Regardless of the fruit basket turnover involving virtual and actual channels, if you have an antenna that picks up all three bands, you still need to be close enough to a tower to pick up the station.

There is no such thing as a 200 mile antenna. If you take nothing else away from this, take that. Marketing hype is a fancy term for lying. Don't believe the hype. Do some research, or reach out to an expert. One is Tyler the Antenna Man, but there are others.

If you can, find a good antenna. Use the resources available to get the local channels, if you live close enough.

By DBDukes - January 21, 2022
Email ThisBlogThis!Share to TwitterShare to FacebookShare to Pinterest