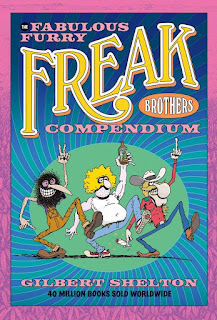 When I was a teenager, there was an underground comic called The Fabulous Furry Freak Brothers. I don't recall if I saw the comics themselves, or if they were printed in another magazine, but I do remember reading them. Well, some of them anyway. It's possible I ended up reading them all, or all that were available at the time.

I did a lot of stupid stuff when I was a teenager.

I will admit that some of the antics of the "brothers" were funny. Some were ... let's say that while they characters weren't really brothers, they were freaks. If you really want to know the details, go look it up. I'm not going to tell any of the tales of the trio, but I will say that some of the satire was very well done, some emphasized shock value to get points across. I didn't always agree, but I did appreciate the humor. Well, some of the humor.

This bit of the 1960s and 1970s (when I discovered the trio) isn't relegated to the past, as it turns out. Streaming service Tubi has announced they'll be producing original content containing the Fabulous Furry Freak Brothers, with the series starting November 14:

THE FREAK BROTHERS will headline Tubi’s first foray into adult animation, as it expands its adult humor collection in the coming months. The additional episodes from Season One will drop on Sundays, one every week, through the finale, Sunday, Dec. 26. The eight-episode series chronicles the escapades of a trio of stoner anti-establishment characters and their cat who wake up from a 50-year nap after smoking a magical strain of weed in 1969, and must adjust to life with a new family in present-day San Francisco.

I'm not sure what to think about it. What was shocking in 1970 is tame today. Well, much of it is. Will this turn into The Second Hundred Years? Another second-half of It's About Time? Or, Encino Man, for you younger ones. It seems it will just be one of those tropes where someone from the past deals with the world today.

That's not what the original Fabulous Furry Freak Brothers were. They were contemporary, from today's world, but with a different outlook on the world. They weren't outsiders from out of time. They were of the time as the times were changing.

I'm not sure if I'll watch the show. I had the opportunity a couple of years ago to re-read some of The Fabulous Furry Freak Brothers and I was less than impressed. I was no longer a teenager looking for something that was rebellious. I was a grown man who had real life to deal with. I did find some part of it still funny, though. And a few things still outside the acceptable behavior of pretty much anyone civilized.

I can't say I look back fondly on The Fabulous Furry Freak Brothers but I'm not sure I like what they're doing to it. But, I could be wrong. It may turn out to be funny and relevant. And, if it does, it may become a regular part of my Streaming Life.

By DBDukes - October 20, 2021
Email ThisBlogThis!Share to TwitterShare to FacebookShare to Pinterest