Chromecast isn't what it should be 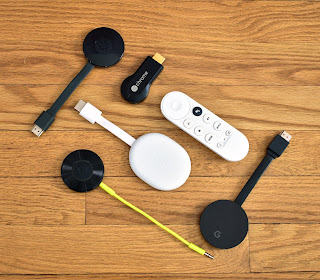 I so want to like the Chromecast with Google TV device. I really do. But Google really makes it difficult. They really do.

Google has a troubled history with streaming devices. They entered the market with the Nexus Q and Nexus Player in 2012 and 2014 respectively.

The Nexus Q never really launched. It was doomed from the start, with its $300 high-end price and its low-end specs. It ran Android 4.0 (Ice Cream Sandwich) and required an Android 4.1 (Jelly Bean) device to use as a remote to control the device. Like the original Chromecast. They ended up giving them all away and canceling the product. The $300 Nexus Q was replaced by the $35 Chromecast, which also requires a mobile device to control it, although it's not limited to Android devices.

The Nexus Player did a little better than the Nexus Q. It was actually in production for a year and a half. It was an actual streaming player, with a remote control and access to the Google Play store. And, it had the features of a Chromecast as well. However, in 2016, Google stopped selling it, and support ended in 2018.

For a while, Google had only the Chromecast as its streaming device. It's a current product, though it has undergone some hardware updates along the way. It's a pretty good streaming device, if you can deal with needing to use a mobile device to launch and control content.

Chromecast is great for casting from a mobile device or a Google Chrome browser. As an everyday streaming device, it leaves much to be desired, at least for me.

Enter Chromecast with Google TV. It's a Chromecast, and more. It has a remote and access to the Google Play store. It's a full featured streaming device, as well as having all of the functionality of the basic Chromecast. And it's a great little device. Almost.

I say "almost" because the Chromecast with Google TV (Chromecast/GTV) is a little light on the specs. While it has more onboard storage than Roku devices, Roku can offload apps and just keep running. Chromecast/GTV requires you to remove apps if you run out of space. It does not have good storage space management.

Here's why that's such a problem.

With Roku, if your device is full, and you launch an app that you already own but isn't on your device, your Roku device will move off older apps and install the newer app. There's a delay of a second or two (usually no more than that) while this happens automatically. It's a pretty decent user experience.

With Chromecast/GTV, if you own an app that's not installed on your device, you are prompted to install it. Once you do that, if you're out of space, you get an error message telling you that. It's up to you to find the apps that you have installed and how much space they have, then determine which one or ones to remove, then go back to the app you wanted to run, install it, then launch it. That's not a good user experience.

The solution is to either increase onboard storage, or have an app manager to handle all these things for you. And if you have ever used an Android device, you know that it doesn't really manage apps this way.

Could it be done? Sure. But it would take some work. Both Roku OS and Android/Google TV are built on a Linux core, so they're cousins in a way. However, they are different enough that this wouldn't be an easy thing to accomplish.

Still, when you cast an app to Chromecast devices (basis or GTV) the Chromecast does actually run the app. How they go about it, I'm not all that clear. But the fact you can launch many apps, cast it to Chromecast, then turn off your phone and it keeps running shows clearly that the content is playing from the Chromecast device. It certainly seems as if there is some kind of app management going on. Why it's not in Chromecast/GTV user interface, I have no idea.

Chromecast with Google TV could really be a good device, if it was a more powerful device and the app management was a lot smoother. I have found myself using the device less and less over time, and that's disappointing. I really want to like the device. But as it stands now, I can't recommend it over other devices as the thing on which to build your Streaming Life.

By DBDukes - May 18, 2022
Email ThisBlogThis!Share to TwitterShare to FacebookShare to Pinterest