Return to cable? It is to laugh 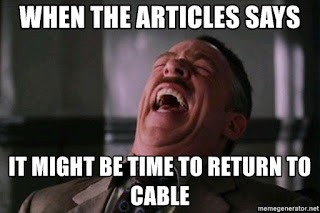 You ever read something and then wonder for a moment if the person is serious, or just writing clever satire? If so, you understand what I went through recently.

I saw an article on Kim Komando's Website that offered suggestions on when it might be time for a cord cutter to return to cable.

Albert Khoury actually wrote the article, and he was serious about it. Now, perhaps you're wondering if you should return to cable. Well, let's look at what was written, and I'll give you my thoughts on this.

If you're paying more for streaming than you are for cable, you might be doing something wrong. First, do you really need a live streaming service? Don't just say "of course" because you don't. Well, probably don't. I certainly don't. Rather than pay $70 for the ability to watch Hulu+Live TV tonight, I'll pay $7 and watch the show on Hulu tomorrow, at a time of my choosing.

And, when it comes to a bunch of streaming services, well, we've covered before that. You can subscribe to a single service per month. If your streaming bill is higher than cable, rethink how you're doing things. The Streaming Advisor has a good article on that.

You only watch shows on network TV or cable channels anyway

I watch some network TV. I have this thing called an antenna, and there's no monthly bill for it. Of course, not everyone can do that, but more can than realize it. But if you watch that content live, there are streaming services that carry most things.

While we're talking about it, remember that time the cable channels changed and you stopped getting that one channel? Sure you do. Yeah, that one. So, cable doesn't always have everything either. Unless you want to pay for an even bigger package. And you only watch it because you got used to it. I found out real quick that I could easily get used to something else, and you know what? I like it better.

You won’t be subjected to price hikes between contracts

Yes, the article actually mentioned price hikes. Because cable prices never go up. You always paid the same amount for cable all the time. Didn't you? No. Huh. Imagine that. It's like someone wanted to write a disingenuous article.

Some streaming services might come included with a cable subscription

Some sports are ONLY included in cable/satellite packages

Okay this is actually valid. But if you're in such a situation, you probably didn't cut the cord anyway. Or if you did, you found out quickly that your team has a TV package straight out of last century.

Regional sports are part of DirecTV Stream. And Bally Sports is launching a standalone streaming service this summer. So, yeah, this one doesn't hold water either.

I get it. Kim Kommando appears as a guest on a lot of cable channels. So, I suppose "America's Digital Goddess" is throwing them a bone. Or maybe she agrees with Albert Khoury. Either way, I'm not giving up my Streaming Life. Well, under one condition. But I don't think that Hell will freeze over any time soon.

By DBDukes - May 23, 2022
Email ThisBlogThis!Share to TwitterShare to FacebookShare to Pinterest