I've been a Roku user for quite some time. In the early days, there was no Roku stick. They eventually introduced one that connected via an MHL port. That's another long story that we won't cover today, but just know that you couldn't take that stick and expect it to work on most TVs today.

In March 2014, Roku introduced their model 3500 HDMI Streaming Stick (to differentiate between the MHL-based stick for the old "Roku Ready" TVs, which is another long story). I got one of those, because I liked the idea of a stick. It was kinda meh. Heck, it was a lot meh.

Research showed they were actually the same device, but came with different remotes in the box. Same processor, same memory, same storage, same everything except the remote. I got my hands on a Streaming Stick 4K+ and tested it. I really liked it, so I bought a Streaming Stick 4K for my own use, replacing a Roku Premiere+ (3921).

It turns out that the stick I love so much has good WiFi because of a fancy-schmancy cable that has a WiFi receiver built in. And some of them are going bad. Well, a lot of them. High number, but likely a low percentage. But enough to make it a pain for a lot of people. 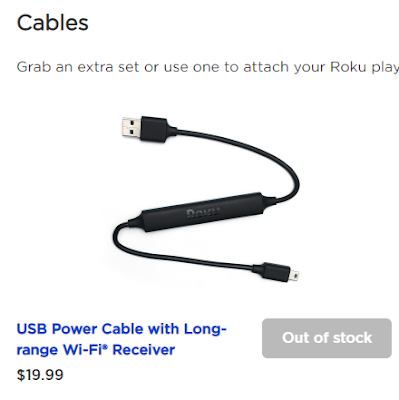 If you have a Roku stick, and it works, and you're happy, great. If you are thinking about getting a stick, I can say that mine all work great. But that cable issue really bothers me, enough so that I won't recommend a stick.

Yes, I bought a stick recently, and like it. But I don't have a problem spending my own money and dealing with a bad decision. I don't want to cause someone else to spend their money based on my recommendation then they regret the decision. I want your Streaming Life to be free of trouble. Roku is making that difficult.

By DBDukes - May 05, 2022
Email ThisBlogThis!Share to TwitterShare to FacebookShare to Pinterest