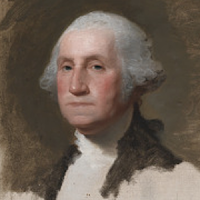 Here's the listing of this year's holidays from the U.S. Office of Personnel Management: 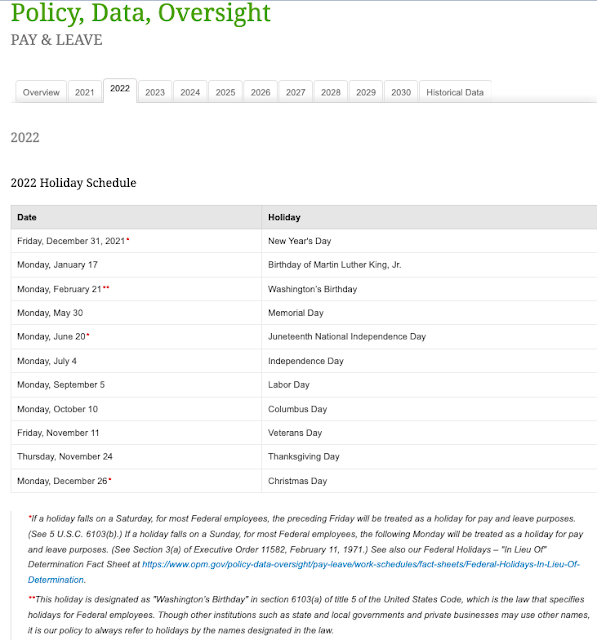 Can you read that part at the bottom? The part that references today's holiday? It says:

**This holiday is designated as "Washington’s Birthday" in section 6103(a) of title 5 of the United States Code, which is the law that specifies holidays for Federal employees. Though other institutions such as state and local governments and private businesses may use other names, it is our policy to always refer to holidays by the names designated in the law.

Some of you, maybe most of you, are thinking that today is Presidents Day. It's not. There is no such thing. And some of you may want to argue about it. "The combined Washington's Birthday and Lincoln's Birthday together and call it Presidents Day."

What some -- or most -- may not realize is that the holiday wasn't to celebrate George Washington as president. Yes, he was president. He was the first under the current Constitution, but that's not why there's a holiday for him.

George Washington was one of the most important figures in the creation of the United States as an independent country. He was reviled and respected -- maybe even more respected than reviled -- by the United Kingdom when the War of Independence was fought. He was loved by many in this young country.

His actions in the founding of this country happened in the 1770s and 1780s, with the War of Independence being fought from 1775 (the 1776 signing of the Declaration of Independence was well after the start of the war; look it up) to 1784 (Cornwallis surrendered to Washington in 1781, the Treaty of Paris was signed in 1783, but Congress didn't ratify it until early 1784; look it up).

Washington became president in 1789, the first one under the Constitution that was ratified in 1788. However, this was at the end of his service to the nation he helped found. He achieved his high status well before he became president. Had he never become president, his birthday would still have been celebrated, and we'd probably not have any of this silly myth about a "Presidents Day."

We would also have not had the presidency of George Washington. Maybe that would have been a good thing, maybe it would have been a bad thing. John Adams, Thomas Jefferson, James Madison, James Monroe, and others, including ones that never served as president, may have been our first president. Perhaps they would have handled some of the major events of those eight years differently. Maybe even some of those events may not have happened at all.

What I do know is that George Washington's birthday wasn't first celebrated because of his presidency. It was because of his actions that led to the creation of this nation, and its establishment as a republic. Without him, there may not have ever been a United States. He didn't do it single-handedly, of course, but without him, there may very well have never been this country.

George Washington was a flawed man. He was an adulterer and a slave owner. He was not a perfect man by any stretch of the imagination. However, we are all human, and we all have faults, some worse than others. Washington was one of the most important men to lead this young country, well before he became president. That is why his birthday is celebrated.

So, what does all this have to do with streaming? Nothing. Unless you bought a new streaming device or TV in some store's poorly-named sale. Now go watch some educational video with your streamer, and learn the facts about something. Like the actual holiday that is today.

By DBDukes - February 21, 2022
Email ThisBlogThis!Share to TwitterShare to FacebookShare to Pinterest