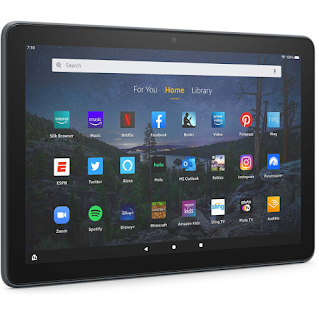 The case for this being a new Fire HD 10 tablet? The FCC documentation doesn’t mention Amazon by name, but everything was submitted by a company called Abyssal Plain, which is the same name as the shell company Amazon used to submit documents for the 2021 Amazon fire HD 10 tablet. And FCC IDs for the new listing (2AWRO-8768) and last year’s (2AWRO-8762) are very similar.

What does this have to do with streaming? Well, you can stream from a tablet, can't you? It's how I stream away from home. Many will pack a Roku stick or Fire TV stick when traveling, but I'll just use an iPad. I could just as easily use an Amazon tablet.

I like the Amazon tablets, but not as much as I like an iPad. Still, they are good little devices. Perhaps the newer tablets, if this is what they really are, will be an improvement.

Whether around the house or on the road, tablets can be very useful in your Streaming Life.

By DBDukes - February 16, 2022
Email ThisBlogThis!Share to TwitterShare to FacebookShare to Pinterest