I've been a streamer since 2010. Well, actually before that, but I got my first dedicated streaming device in late 2010. Two different ones, actually: Apple TV (2nd generation) and Roku (XDS model 2100). I had used Netflix on my TiVo prior to that, but the TiVo wasn't really what I considered a streaming device. The Apple TV and Roku XDS were definitely streaming devices.

I liked the Roku better, because you could do more with it. Today, I'm still a fan of Roku. I've used a lot of different streaming devices, including a lot of different model Roku devices. I'm very familiar with the devices, and might even be considered an expert on them. Roku considers me one, to some degree. Seriously. 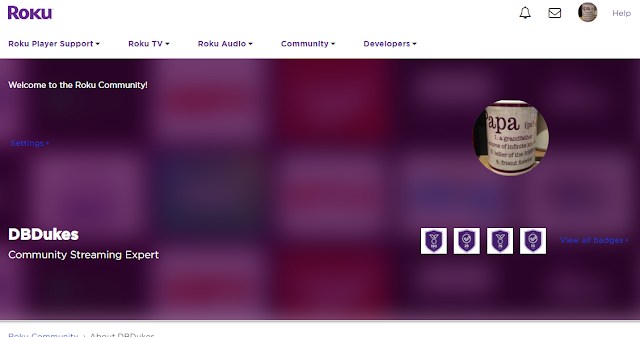 That's from my Roku Community page. Roku assigned me that. I'm one of several who are listed as Community Streaming Expert on the forum. If one of the experts suggests something, it's a good suggestion. The other CSEs know their stuff. And, to be frank, I do too.

So, with that bit of background, I want to offer suggestions should you find yourself needing support from Roku with an issue.

It's difficult to speak to Roku directly, so the Community is probably one of the best options you have regarding getting support for issues. Who knows, you might even encounter me there. Which isn't a big deal, since you can get me here too.

Anyway, if you go to the Roku Community support forum to get help, there are a few things that you really should do to help those that are trying to help you.

Provide the Roku device model number. You can locate the model number on the device itself, or from the menu system by going to Settings > System > About

Now, why is this important? Well, different devices may have small details different in how you approach them. For example, if for one problem, the first step in fixing it is to change the HDMI cable, that would not be the solution for a Stick, that plugs directly into a TV. Knowing which device it is makes a difference.

Another is that sometimes, people aren't sure which device they have. That may sound silly, but it can be difficult to know which device you're using. I've seen people report they were using the Roku Express Ultra Stick. Well, the problem with that is that there is a Roku Express, a Roku Ultra, and a Roku Stick, but there is no combination of those. The model number would help support determine which Roku it is.

When you're needed help with Roku, always provide the model number of the device. It helps them help you. And, if that makes your Streaming Life easier, it's worth it.

By DBDukes - July 11, 2021
Email ThisBlogThis!Share to TwitterShare to FacebookShare to Pinterest