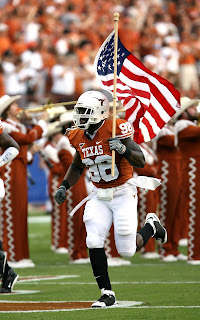 Recently, there's been some major sports news with the possible (at this writing) move of Texas and Oklahoma to the Southeastern Conference. This is big -- heck, it's huge -- in college football, but has major implications in other sports as well.

So, I've been thinking about college sports lately. I don't watch lots of sports except during the fall, when I take time out for football. So as August and the start of the college football season approaches, I'm planning out my sports channels.

Being a fan of SEC football -- there are teams I love and teams I hate -- I'm looking for CBS, ESPN, and SEC Network. I'll need to look at the live streaming services that carry those channels. I'll even look at multiple services if it will save some money.

Looking at the schedule, the national championship game is January 10, so I'm planning to have service through January 11, just to be safe. Since subscriptions for the live streaming services are for 30 days at a time, I need to do some calculations.

Now, it's not as simple as saying, "Okay, I need to subscribe on August 11th" because the subscriptions aren't for a month, but rather 30 days. So, a subscription starting August 11 actually will need a renewal on January 8, 150 days later, in order to cover through January 11th. That means subscribing on or after August 15 means 5 months of service. Subscribing between now and the 15th means 6 months of service. I'm cheap, and I'm going with subscribing on August 15th.

Which services? Well, I have several options.

First, I have an antenna, so I can pick up the local CBS affiliate, giving me the SEC game of the week. I'm not opposed to a streaming service with CBS included, it's just that I don't need that. But you might.

Next, I want ESPN. That's where the games are. Well, most of the games. The ones I care the most about will be on ESPN or CBS. But not all.

I also want SEC Network. You may want ACC Network, PAC-12 Network, Big Ten Network, or some other sports network. That can complicate things. I'll go into how to pick your poison some day soon, but for now, I'm just giving a rough idea of what you'll need to do, just to get you to thinking about what you'll finally do come mid-August.

Right now, for ESPN with SEC Network, the best price is for Sling TV Orange with Sports Extra. That's $46. Here's the breakdown.

If I didn't have an antenna, and needed to stream CBS, the list would change slightly, by needing to add Paramount+ Premium to Sling TV or Vidgo. The others already include CBS locals.

As we approach mid-August, I'll go over in detail what's necessary to watch college football in the most cost-effective manner.

Planning this far in advance may seem silly, but I want to ensure I have the best bargain for the sports I want. And, you don't have to drop everything and do this now. Just be thinking about it over the next three weeks, then, when it's time, you can start the services to make the sports fan in your Streaming Life happy.

By DBDukes - July 25, 2021
Email ThisBlogThis!Share to TwitterShare to FacebookShare to Pinterest