Way back in the 1980s, or maybe the late 1970s, I first contributed to PBS. I think I was liking some British sitcom (Britcoms) or other. Anyway, that's when it started. I think I got some silly dollar store bling as a thank you. I don't recall. Maybe even a mug. I just don't remember.

Anyway, the point is that contributing to PBS still has some benefits, and today, they're a little better than a dollar store mug. Unless you're a pessimist, in which case you think they're extorting money from you. I'll give you the details and you decide.

While a lot of content is avaiable on the PBS app, some items are marked with a little compass, indicating it's PBS Passport content. 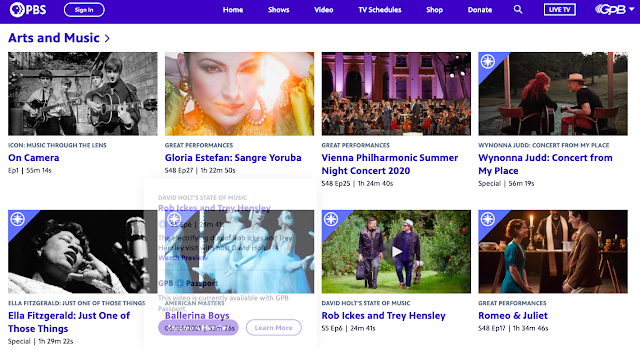 The content that doesn't have the icon is available for watching for free. The PBS Passport content requires you to have a PBS Passport membership. How do you get one of those? Donate to PBS at a certain level.

The level for PBS Passport is $5/month or $60/year. If you donate that amount, you can log in to the PBS app and watch PBS Passport content.

I suspect most people will fall into one of two categories:

I'm more of the first category. But, however you fall there, the end result is the same: PBS content on your streaming device. How much is up to you.

I don't watch PBS content regularly, but when I do, I'll spend hours there. To me, it's worth the $5/month -- and I give more than that -- to get the content. I also simply like supporting PBS. No, I don't like everything PBS does. My political stance and theirs often conflict. But I do think that, overall, PBS is a good thing. So, I donate. I prefer people supported stuff, not government supported stuff, which is about as political as I'm going to get.

PBS apps, with or without PBS Passport membership, offer a lot of good content for your Streaming Life.

By DBDukes - July 22, 2021
Email ThisBlogThis!Share to TwitterShare to FacebookShare to Pinterest