Netflix recently launched its new ad-supported tier. It's $7/month, and is the same as the $10/month plan, except you can't download content for off-line viewing, and there are ads.

Being someone who doesn't do Netflix, I wasn't sure what it would be like. I dropped Netflix several years ago. I realized several years back that I didn't need to subscribe to everything all year long. Netflix was the first major service I dropped, and it was years before I ever used it again.

I only subscribed to Netflix when they brought back Mystery Science Theater 3000, and only kept it until I watched all the episodes. Then canceled it again. They brought the show back for one more season, so I subscribed again, then dropped it again.

Recently, I logged in (I only canceled service; I didn't delete the account) and picked the Basic with Ads tier to give it a try. 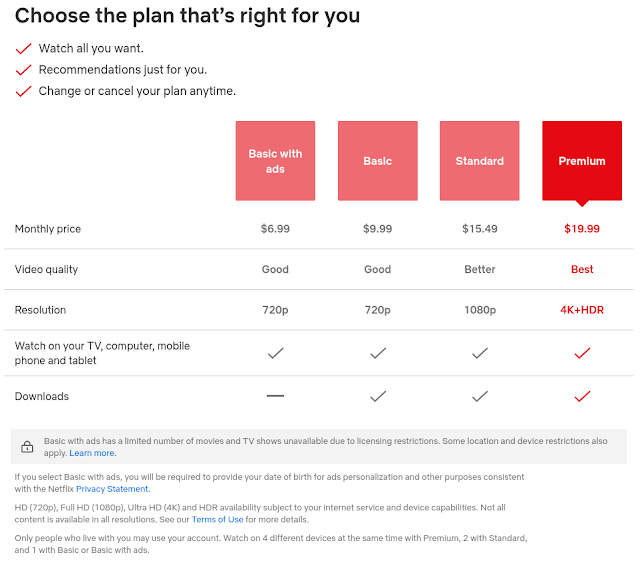 Well, so far, I've only watched a couple of things.

First, I watched Monty Python and the Holy Grail. There was a 30-second ad break to start, then about a half-hour in, there was a 75-second ad break, and one every 15 minutes (thereabouts) afterwards. It wasn't directly on the minute, and the breaks came at reasonable times within the film. If you are familiar with Monty Python and the Holy Grail, you know it's a bunch of skits thrown together within a King Arthur narrative. What I'm saying is the ad breaks came at reasonable spots, and not in the middle of a sentence, like you'll see on some free ad-supported services. They put some work into it to make it less of an intrusion.

The next movie I watched was The Dirty Dozen. No ad breaks within the entire film. Just the one before the film, but once the actual film started, there were no breaks for ads.

Now, whether or not this was an error, I don't know. Perhaps it was a fluke. But, when I watched two movies on the same day, one had ads at convenient places, and one had no in-movie ads at all.

Of course, these are both older films. But then, I wanted to ensure if I watched something, it was something I enjoyed. I could just put it on while doing something else and check to see when ad breaks happen. Maybe I'll do that.

But, my first impression is a good one. You see, I don't really mind ads. I just don't like them interrupting the flow of a scene. To the credit of Netflix, the experience was good.

But, as I won't keep Netflix beyond the time of the subscription, and was only interested in seeing how the ad experience was, that's not that big of a deal. I knew going in what to expect. What I didn't expect was that ad experience would be so much better than most services.

Netflix did ads right. If you want Netflix in your Streaming Life, and the 720p resolution works for you, then consider saving another $3/month and go with the Basic with Ads tier. Next time I need to subscribe to Netflix, it's the way I'll do it.

By DBDukes - November 09, 2022
Email ThisBlogThis!Share to TwitterShare to FacebookShare to Pinterest