Choosing an antenna the easy way: let someone do it for you 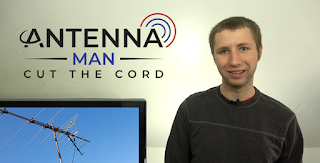 Although we had an antenna in my youth, by the time I was out and on my on, cable was big, and had all the channels I wanted, and more. When I got my own place, I didn't get an antenna because I got cable. That gave me all the local channels. My parents eventually got cable, and finally took down their antenna. I don't know why they didn't just leave it, but this is what they did.

Years later, my mother dropped cable, and I put up an antenna at her house. This time, though, it was a little different. She lived over 40 miles from the TV towers, and you can't just get any TV antenna to work. So, I had to do a little research.

A couple of years back, I ran across Tyler the Antenna Man's YouTube channel. I watched one of his videos and, while I don't claim to be an expert, much less "The Antenna Man," I do know a little bit about what I'm doing. I did my research. But, I figured I'd watch more of his videos and see just what he was all about.

Turns out, I was impressed with his knowledge. His videos are for the general public. He doesn't exactly dumb it down for people who don't understand or care about all the things that go into picking up TV signals, but he does explain things in a way that's good for most people.

I had picked out an antenna for my mother's place, but hadn't purchased it yet. Part of the problem was finding somebody to put it up. It's not just the physical installation of the antenna an pole, but the electrical lines that ran there. Those are dangerous, and I'm not looking to play reckless games with an antenna. I needed someone to install.

Tyler's Website offers a consultation service (I think I paid around $40 back in 2020; it is still that price today) for both an antenna, but also installer options. He found someone that would install it for me.

Tyler's antenna recommendation was a good one, and he did find someone to install it, so I was happy with the decision to use his service.

The installer had antennae that would do the job, and the one he brought was one of the ones Tyler had recommended. I felt good about it all, and the setup still works. I expect many long years of service from it.

Am I recommending Tyler the Antenna Man. Yes, I suppose I am. But I'm also saying that if you do the research properly, you'll wind up with the same conclusion.

My research showed that I didn't need his services, but I'm happy enough with his services that I bought that I can feel good about recommending him. If nothing else, it ensures you aren't overlooking something, and gives you peace of mind. If that's worth $40, then it's a bargain.

An antenna is a great complement to your online viewing, and should be considered as part of your Streaming Life. I've been happy with my choice to put up an antenna.

By DBDukes - November 17, 2022
Email ThisBlogThis!Share to TwitterShare to FacebookShare to Pinterest