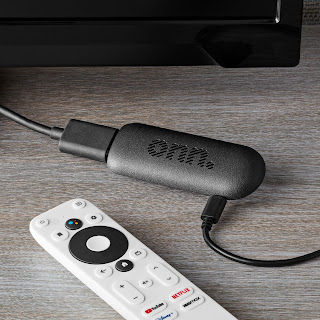 I posted recently that I was testing the Onn Streaming Stick from Walmart. When I test a new device, I always intend to give it at least a week of exclusive use, getting familiar with the device, and settling in on using it. Sometimes, though, it doesn't take a week. And, when it doesn't take a week, that's not a good thing.

You see, if something starts out really well, say I get my hands on a device I really like, I won't stop testing. I'll let the love affair run the full week, maybe even longer, before deciding on how much I'll use the device. I want to give it plenty of time for the ugly bits to appear. I want to experience the device under all circumstances. So, if I'm liking the device, I'll keep testing for at least the full week. Using the device daily, and I do use a streaming device daily, lets me get a good feel for it.

Setting up and downloading updates was actually pretty smooth. The device is an Android TV powered unit, and included the option to use an Android phone to set it up. However, I don't use an Android phone. Still, manual setup was easy enough. The only problem came when running apps for the first time. I had to configure each, signing in with my account, and then the app would run a bit sluggish. I wondered if it was because it was still running updates, so I waited, then restarted the device. It seemed to respond better, but it still seem sluggish compared to ChromecastGTV and Roku.

I ran into issues with the device hanging up. I wasn't sure if it was the device, or the service. I've used enough devices for long enough to know that sometimes it's not the device that's at fault, but network, Internet, or service that can cause problems. So, to troubleshoot, I eventually switched to Roku to access the same app and move or TV show. No problems using Roku. So, I'd restart the Onn Stick and try again. Sometimes, it would work for a bit then start acting all silly again, and sometimes the issue didn't reappear. If it was problematic again, I'd try Roku again, and if the issue wasn't there, I chalked it up to the Onn device, or the particular stream the Onn device was using.

Let me take a side trek for that point. Not everyone realizes that different devices can, and often do, use different streams from different servers. For example, if you are using Roku to stream Netflix, you may connect to one server (or set of servers). But, if from the same location, you use an Apple TV to watch Netflix, you may connect to a different server (or set of servers). And a different server/set if you use Fire TV. So, using an Android TV box, I could be getting my source content from a server/set that's acting up, while the Roku is getting it from a server/set that's working better. So, what looks like a device issue may actually be a service issue. That's why I'd try different apps. And, since this was an Android powered device, I'd try YouTube a lot for testing. As a reminder, Google owns both Android and YouTube. An issue with Android and YouTube could be a Google issue, but it seems more likely to be a device issue. And, I treated it as such in my mind.

So, back to the testing. As I said, I used YouTube a lot in the testing, and I would have issues, particularly on fast forward and rewind. No such issues when I switched to Roku for the same video.

I also tested with Movies Anywhere. The experience was not as great as on Roku, because of how sluggish the device seemed, but the playback did work well.

Paramount+ was a problem. Fast forward and rewind would occasionally lock up the device.

Tablo was okay. I watched both live and recorded content without much issue.

Manually launching the screen saver didn't always work. I used the Backdrop screen saver, which is a bunch of pictures from Google. Landscapes, etc. Pretty high def images, so I'm thinking the underpowered device was the problem.

The other thing I tried was using the Chromecast feature. That was something I didn't really expect, but makes sense thinking about it. I was hoping it would work well. It didn't. The switchover went okay, but the control was the problem.

As a reminder, or if you weren't aware, the "casting" via Chromecast functionality uses the apps on the device. For example, the app on the phone actually launches the app on the streaming device, then loads the video, and moves to the same point in the playback. You could even turn off your phone, and the streaming continues, because it's not really using the phone anymore. Except you can use the phone to pause, rewind, or fast forward.

Anyway, it wasn't nearly as smooth as an actual Chromecast device. Not a terrible experience, but not a good experience.

Would I use this device regularly? No, not at all. It's already back in the box and ready for a shelf or drawer. I'll pull it out every month or so to run updates just in case it's a software problem and not a hardware problem. I don't expect that to actually make a difference, but just in case, I'll keep a check on it. For now, though, I don't plan on using the device.

Would I recommend it? Not really. I think a similar priced Roku Express would be a better option. But, will it do? Maybe. But no. This isn't a device I want in my Streaming Life.

By DBDukes - June 30, 2021
Email ThisBlogThis!Share to TwitterShare to FacebookShare to Pinterest