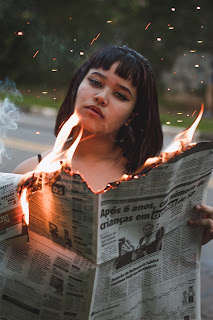 When you have cable, it's really easy to watch news. Or what passes for news these days. You can tell I don't think much about cable news services, can't you?

When I want news, I want news, not some silly propaganda outlet that spouts one political party or the other's agenda. It's hard to find real news, with facts, and with all the facts. They're all bad about presenting unsupported statements as news, about leaving out any information that doesn't fit their agenda.

Yeah, I don't care much for cable news. So, I don't really miss it. I did, when I first started streaming and dropped cable. Watching the talking heads was a regular thing. So, when I dropped cable, that went away, and I went through withdrawal.

I got over it. I didn't have a choice. I could either do without, or subscribe to cable again. There was no Sling TV, no YouTube TV, no Fubo, no anything like that. So, I did without, and got over it. And I'm better for it.

However, I'm not one to avoid news. I do read news on the Internet. I subscribe to some news services, but they aren't streaming services. I read the news online. I read from a variety of sources, not just those that fit my personal political leanings.

That doesn't mean that cable news services are not worthwhile. I choose to avoid them, for the most part, but many people find them worthwhile.

For the big news services -- CNN, MSNBC, Fox News, and such -- you have to subscribe to a service such as Sling TV, YouTube TV, Hulu + Live TV, AT&T TV, Vidgo, Fubo, and such. But, if you want other news services, there are plenty of options. Of course, those services don't just carry those major news names, but they carry other news services too. However, you can still get a lot of news from streaming without spending a lot of money to hear loud people shouting.

One source is one of my favorite sources for free streaming content: Pluto TV. There are nearly two dozen news channels, ranging from left to right.

The Roku Channel has nearly as many news channels. Stirr offers some news channels, too, including local news. Even Sling TV's free service has six channels in the News category.

There are also hundreds of apps from various news sources, ranging from local TV stations with their own apps to international news services.

All of these are available streaming, meaning that dropping cable doesn't mean you lose access to news. Unless you want that. You can spend some money and reconnect with the talking head channels, or you can utilize free services that offer a wide range of news sources.

However you want to incorporate news to your Streaming Life, you can probably find a way.

By DBDukes - June 28, 2021
Email ThisBlogThis!Share to TwitterShare to FacebookShare to Pinterest