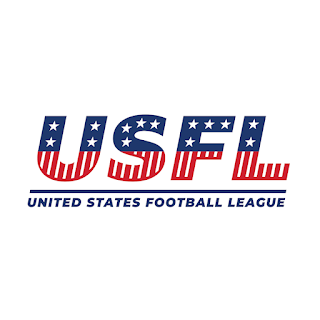 I'm still trying to decide if I care about the USFL. The startup league seems to be banking on a nostalgia factor with some football fans, although that really doesn't make much sense.

The original USFL played for three seasons in the 1980s and included some players that were later NFL or CFL stars, such as Herschel Walker, Jim Kelly, Doug Flutie, Reggie White, and Steve Young, among others. Since Jacksonville was close by, the Bulls, which existed during the league's final two seasons, were my team, and I enjoyed the hours I spent in the Gator Bowl watching them play.

But am I really anybody's target audience any more? Probably not. But this new USFL seems to be banking on that old league to at least some degree, with all eight teams using names and logos from the old league.

I won't spend much time wondering why. I'm still undecided on whether or not the league is something I care about, but it is something somebody cares about. And when the league announced their opening week schedule recently, I was quite remiss in not covering it. I don't know how important this league will be, but I should have covered that. I'm fixing that now.

The USFL schedule for the first week of the season was announced, and there will be a Saturday night game, and three Sunday afternoon games. All games will be broadcast on either Fox, NBC, Peacock, USA, or FS1.

The inaugural season will kick off Saturday, April 16, when the New Jersey Generals face the Birmingham Stallions at 7:30 p.m. ET in a game that will be simulcast nationally on FOX, NBC and Peacock.

The USFL will then showcase a tripleheader on Sunday, April 17, with the Houston Gamblers meeting the Michigan Panthers at noon ET, the Philadelphia Stars playing the New Orleans Breakers at 4 p.m. ET and the Tampa Bay Bandits battling the Pittsburgh Maulers at 8 p.m. ET.

Now we know when this new league will enter my, and maybe your, Streaming Life.

By DBDukes - March 10, 2022
Email ThisBlogThis!Share to TwitterShare to FacebookShare to Pinterest