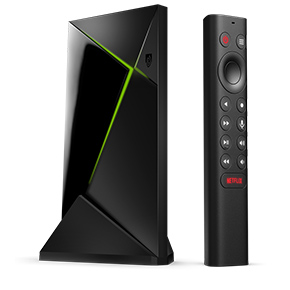 I mentioned recently that I was getting an Nvidia Shield device. I had held out for a while but finally decided to give one a try.

Well, it arrived, and I set it up, which went very smoothly. However, I'm not going to talk much about that. That's because, I'm not using nor testing the Nvidia Shield as a streaming device. I have something else in mind.

If you saw my earlier post, you may have noticed that I had a second reason, above and beyond testing, for getting an Nvidia Shield device.

There's one other reason for getting the Nvidia Shield, but I'll talk about that another time. And that's the reason that tipped the scales. Yes, I'm ending on a teaser. But the truth is that without that other reason, it would still be a thing I should do, if I'm going to consider myself an expert on using streaming devices.

So what happened? Well, if you recall, I've been setting up another Plex server for a family member, and ran into some issues trying to use a Raspberry Pi device. I don't know if I misapplied an update, or what, but it went from working great to becoming a brick.

I was reconfiguring it, heck, I was actually using multiple physical devices -- I have more than one Raspberry Pi device -- and nothing was working. So, back to the drawing board. But before doing that, and since there is no rush on the Plex server, I decided to start testing the Nvidia Shield.

Getting it all set up, I saw the Plex server reference. You see, an Nvidia Shield also can be a Plex server. It comes with the server software, you just have to enable it. So, enable it I did. I put the external drive on it that I was using for the Raspberry Pi Plex testing, and everything started working great. Little bit of configuration of course, but it all worked quite well.

I immediately stopped my plans to do streamer testing of the device and went into Plex server testing mode. And I'm still there. So far, it's been great. So I'm focusing on that for now. I may have found my Plex solution. Wouldn't that be something.

I still plan to do testing on Nvidia Shield as a streaming device. But for now, using it as a Plex server is the focus of my Streaming Life.

By DBDukes - March 18, 2022
Email ThisBlogThis!Share to TwitterShare to FacebookShare to Pinterest