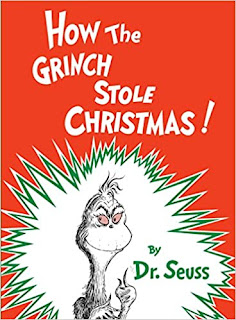 Roku's blog published a list last week of their top 10 most searched Christmas movies. I'm not sure what

Here's my issue. It's not the movies exactly, but it really kind of is. If it searched for "Grinch" would that count as number 1 or number 6 on the list? I have a problem with either one.

You see, if I search for "Grinch," I'm not looking for Benedict Cumberbatch (#6) or Jim Carrey (#1). I'm looking for Boris Karloff and Thurl Ravenscroft. The thing is, you can't watch it unless you own it. It's not available for free streaming. But you can buy it from Amazon or from some other service.

I thought that perhaps that was why they didn't count it, but other movies on the list require a subscription or purchase. So, I'm wondering if the searches for either of those two movies are actually for those two movies, or if searches for the original classic are being counted that way.

Of course, maybe they were able to count them correctly, and the Chuck Jones classic animated feature is there, just not in the top ten. It could be that my personal preferences are clouding my view of this. I have nothing against the Universal/Illumination feature from 2018. In fact, I own a copy. Not for me, but for the grandchildren.

I'm not going to say I have nothing against the Jim Carrey movie. I was tired of him about the time Fire Marshall Bill retired. I never cared for his Grinch movie. But, yes, I own it. For the grandchildren. I mean, just because it's not for me doesn't mean it's not for them.

Back to the question about the search results. Well, I just don't know the answer, and I wonder if Roku knows ... or cares. It's not that big of a deal I suppose. I just prefer anything presented as fact be actual fact. I also prefer Boris Karloff as the Grinch, and Thurl Ravenscroft singing "You're A Mean One, Mr. Grinch." But, if you prefer one or both of the others, that's great. They're available for streaming, and you can watch them this Christmas season. You can have the Grinch you want in your Streaming Life, whether it's my Grinch or not.