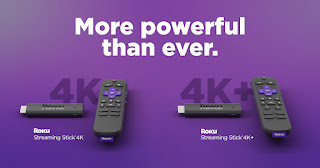 I recently speculated about new Roku devices being announced soon, and I doubted I would be interested in one.

Well, now it's official. New Roku devices are out. And they're all sticks.

Okay, not all of them. But two are sticks, and the other is an update to the Walmart exclusive Ultra LT.

The specs look good, as you would expect. But my current sticks work just fine. I wouldn't really gain anything by replacing any of them. So, for me, I won't be upgrading. However, if I do need to replace a device, or add a stick to a TV, I'd definitely get one of these. It's worth getting, it's just not worth getting simply to get.

The Roku Ultra LT? It's been a scaled down Roku Ultra ever since this Walmart exclusive was launched. It's a good device, and I would consider it worth the cost. However, Roku does put the full Ultra model on sale enough that I'll buy it when it's on sale if I need a new Roku device. Well, unless I buy a stick. I kind of let what's on sale drive it.

The Best Buy exclusive Roku Steaming Stick+ Headphone Edition? I'm not seeing a replacement for it, unless you consider the Roku Streaming Stick 4K+ as that, since the remote comes with headphones for this new model.

I don't know if Best Buy will continue to carry the Streaming Stick+ but I've seen nothing to indicate it would be discontinued. This is a wait and see thing.

Will other devices be released? No idea. Maybe. But probably not until next year.

I don't think I'll be buying a new one of these, as although I see value in them, I don't see enough value to justify the expense. My Streaming Life is fine as it is.

By DBDukes - September 21, 2021
Email ThisBlogThis!Share to TwitterShare to FacebookShare to Pinterest