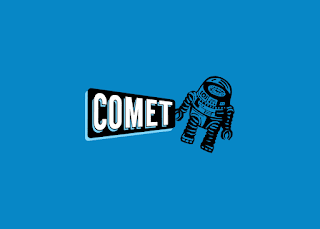 I wanted to take a few minutes and talk about an app that I don't think I've seen anyone write about. To me, it's one of the most interesting apps, not because of the content necessarily, but because of what the app is. Bear with me, all will become clear.

Comet is the app for the TV network that is carried in several cities. The nearest Comet affiliate to me is WTGS on the sub-channel 28.2. The main channel is the local Fox affiliate, owned by Sinclair Broadcast Group. The Sinclair channels Antenna TV, TBD, and Charge also are carried by WTGS on 28.3, 28.4, and 28.5 respectively. It's possible, even probably, you have a local channel that carries Comet.

If you aren't familiar with Comet, it's a science fiction channel. Think SyFi (formerly Sci-Fi) but no new or original programming. It's like TV Land for sci-fi fans.

Comet stands apart form other non-major networks in that it offers a free live stream via their app. If you have a Roku or Apple TV, you can add the Comet app and watch the live stream of their programming. For free. No subscription. You want to watch Comet, just use the Comet app.

If you don't have Apple TV or Roku, you can launch the STIRR app -- STIRR is owned by Sinclair also -- and watch Comet that way. It's easier to watch via the Comet app.

I'd love for other networks to follow this lead. I would enjoy being able to watch MeTV, Antenna TV,  Laff, Grit, Ion, or any of the other minor networks as easy as launching an app.

Now, if you have an antenna (I do), you don't really need the app to watch Comet. You can simply tune you TV to the local station that carries Comet programming and watch. Or, launch Tablo, Air TV, or (for Fire TV users) Fire TV Recast and watch it that way.

If more networks would do as Comet does, my Streaming Life would be so much easier.

By DBDukes - September 25, 2021
Email ThisBlogThis!Share to TwitterShare to FacebookShare to Pinterest