Support forum expert, but why? 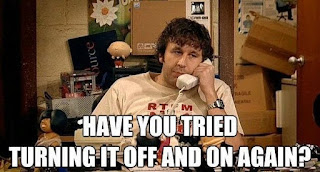 I've been a Roku user for years. And I've frequented the Roku support forum for almost as long. Less than a year after I bought my first Roku device, I logged on the Roku user support forum. The reason was that I had an issue. I don't recall the details, but it was that an app worked on other platforms, but not on Roku. That much I recall. And that was when I began to learn more and more about how things work.

Since that first request for help, I think I may have asked for help with a couple of other issues in 2011, and maybe in 2012. But that was it. If that much.

However, I've been a frequenter of the support forums for years. Often I'd just read and learn, but occasionally, I'd chime in with responses. In the last few years, my time on the Roku support forums has increased greatly. And the number of people I've helped has increased as well.

In the last four years -- that how far back the stats go -- I've been credited with 275 solutions. That's official credits, either by the user with the initial issue, or by Roku staff. Additionally, others have stated that my answer solved the problem but they didn't officially mark it as such. And, lots more times, the answer I gave was right but there was no acknowledgement of it. But officially, I have 275 solutions provided.

I like that. I like the idea that I was able to help someone solve a problem. So, is that why I do it? Yeah, probably. Maybe I'm guilty of wanting to be the smartest person in the room. Well, on the Roku support forum, that's hard to do. Some of the Roku Community Experts really know their stuff. Every one of them that have that bestowed upon them by Roku really know their stuff. Including me.

Now, I still learn stuff, and I in no way think that I know everything. If I don't know the answer, I won't respond with "I don't know." Well, not often. But I have done that, but it was to help summarize the question posted. Sometimes, the person posting has no idea what's wrong or even know how to ask the question. So, sometimes, if I think I understand what's being asked, but aren't entirely sure I understand the question, I'll respond in an attempt to restate the question. Or ask the person posting to restate. That's not to put anyone down, but an attempt to elicit information.

Sometimes, I've discovered that I had no idea what the question really was, and once I found out, backed away. Sometimes, if it's outside an area with which I'm extremely familiar, I'll post some general steps, with requests for additional information. Sometimes, those general steps actually resolve the problem. That's usually the old "Have you tried turning it off and on again?" kind of troubleshooting step.

So, do I do Roku support to stroke my ego? Maybe. I do enjoy challenges. And it's fun. Sometimes. But not all the time.

It does offer the chance to learn something, but I really do enjoy the thought that perhaps I've helped someone improve their Streaming Life.

By DBDukes - July 05, 2022
Email ThisBlogThis!Share to TwitterShare to FacebookShare to Pinterest