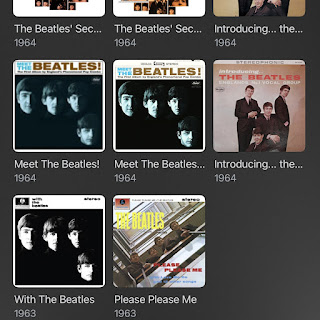 This isn't really about streaming, but it came up because of streaming. Specifically, my Plex server setup, which not only includes my movie, TV, and video shorts collections, but also includes my music collection.

I don't have all of my music in Plex just yet. That's not really a priority, but I have some artists collections in Plex. Only three at the moment, two of which are complete: the Beatles, Elton John, and Eagles.  Elton John isn't complete, as I don't own all of his releases. But, most of what I own, at least the full albums, are there. But it's not Elton John I'm talking about today. It's the Beatles.

I owned the stereo versions of their US albums, except Meet The Beatles; I had the mono release. I later bought the Beatles In Mono CD collection, which contained the UK official version of their albums in mono, which were the versions the Beatles considered official. They didn't care about stereo releases until the late 1960s. All of this to bring up that I had a version of all of their releases in some format or another.

When I began moving the content into Plex, I first moved the official catalog CDs. But I grew up in the US. To me, Meet the Beatles is a better album than With the Beatles, the UK counterpart. There's a whole story behind why they are different, and that could take days to explain. Essentially, the US label, Capitol Records, had a different philosophy about releasing music, and part of that was driven by the US standards vs the UK standards. I may talk about all that one day. Or not. Bottom line was most of the US releases were different from the UK releases.

Remember when I mentioned Introducing the Beatles on Vee Jay? There's a whole 'nuther story around that for another day (if at all). Oh, and a movie deal meant that United Artist Records got some tracks that Capitol Records didn't.

The end result of this is that when the Beatles broke up in 1970, there were 13 songs that had not been released on Capitol Records. Eight of them had never been released in any form at all on a Capitol album, though . Three were tracks that were in versions only available on singles in the US, one was on a charity album, and one was a B-side from a single.

In 1978, the UK label released a collection of non-album tracks called Rarities. In 1980, the US label (Capitol) released their version. Some of the UK Rarities had been released on albums in the US, but, as I mentioned, 13 songs were not available on any album. So, the easy thing would be to put those 13 on an album and release it, finalizing the Beatles catalog on album.

Here's how that would have looked:

Note that I said "would have" because this is not what Capitol did. Rather, they left off:

They added the run-out from Sgt. Pepper's Lonely Hearts Club Band, which had been omitted from the US album. However, they didn't include it in the run-groove, but as a 27-second version of the intro and 2-second loop.

I disagree with creating brand new mixes and calling them rarities, so two of those are bogus right off the bat. Two had actually been released previously, so those was totally bogus. The other two were rare in the US, and I won't complain too much about them, but the five they omitted where major omissions, especially I'm Down, which had never been on any album on any label in the US.

So, when I began putting my music into Plex, I decided to reconstitute the Rarities album, rather than transfer from vinyl to MP3. Well, as many as I could. A few had to be transferred from vinyl, but most didn't. I already had them on MP3 and simply edited the tags appropriately. That saved a lot of time. that actually led to something else which I'll cover another day.

For now, I was able to recreate my vinyl copy of Rarities and add that to Plex. And after much though, I created my own Bonus tracks. You know how re-releases of albums will include bonus track? Well, I added five bonus tracks to Rarities. The missing tracks from the Capitol album catalog.

I had actually done this before. My Rarities album was missing for a while, so I had recreated it years ago with what I had, and putting the five omitted songs in place of the six dubious ones (I didn't have the White Album on mono at the time). Finding my Rarities album allowed me to recreate an MP3 version. But the bonus tracks makes it more complete than the official one.

Thanks for taking the time to head down this side path of Beatles music. It's not streaming, but if it inspires you to add your music collection to Plex or another server setup that allows you to stream your personal music catalog from anywhere, then I've actually done a good thing. I like having my music available in my Streaming Life, and I hope you'll be able to have the same pleasure from yours.

By DBDukes - April 04, 2022
Email ThisBlogThis!Share to TwitterShare to FacebookShare to Pinterest