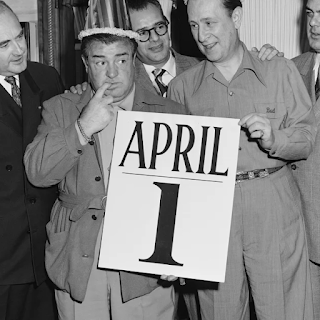 I really enjoy the April Fools gags that many Websites used to play on April 1st. I say used to play because the last couple of years I really haven't paid attention. But they used to be funny.

One of my favorites was taping down the switch hook. For you kids, that's the little white post that the handset rested upon. Pressing it down mean the phone was "hung up." Raising the handset caused the switch hook to rise, taking the phone "off the hook." You had a dial tone. And if you don't know what a dial tone is, go as a grown up.

Anyway, at work, our desk phones way back in the ancient times had the switch hooks that I'd tape down. Then I'd call the unsuspecting person. They'd go to answer the phone, holding the receiver against their ear, but the phone would keep ringing. We all laughed.

Another was taping the mouse wheel. For you kids, a computer mouse once had a rubber ball that rolled along a table or mouse pad -- laser was future tech -- and the movement of the ball was translated to mouse movements. But, tape it down, and the mouse cursor wouldn't move. We all laughed.

It was a simpler time. But it was fun. Stupid, but fun. And all in good fun.

What's all this got to do with streaming?  Nothing. April Fools!

No, what I'm doing is saying how much fun it used to be, and I hope there are some streaming related gags happening today to brighten my Streaming Life. You see, I read the news. I could use a good laugh.

By DBDukes - April 01, 2022
Email ThisBlogThis!Share to TwitterShare to FacebookShare to Pinterest