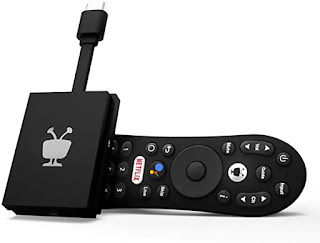 I've recently added another streaming device to my arsenal. I recently obtained a TiVo Stream device and am testing it out.

It's an Android TV device, similar to the Chromecast with Google TV. The interface is more like what you would expect from TiVo than from Google TV.

I got my first TiVo DVR in 2006, and upgraded a couple of times along the way. All of the TiVo devices I've owned since 2006 have all been DVRs with some streaming capability. This is the first solely streaming TiVo device I've owned.

A lot of people have said some good things about TiVo stream. With Roku, Apple TV, Chromecast, and Fire TV devices, I never bothered to try the TiVo. My most recent experience with TiVo, trying to replace a defective device for my mother's setup, soured her and me on TiVo. But, I'm going to try their streaming device anyway.

It arrived this past week, and I set it up, but didn't use it so I could complete my testing of the Chromecast with Google TV device I wrote about recently. And now it's TiVo Stream's turn.

I'm going to spend the next several days using it exclusively. Well, that's the plan anyway. Of course, Robert Burns wrote "The best laid schemes o' Mice an' Men Gang aft agley" ("The best laid plans of mice and men often go awry”). Or John Lennon's "Life is what happens to you while you're busy making other plans." Either, or both, could apply.

Let's see how this goes.

By DBDukes - May 20, 2021
Email ThisBlogThis!Share to TwitterShare to FacebookShare to Pinterest