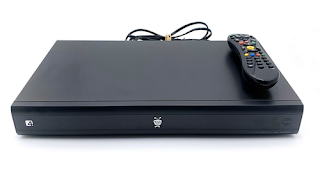 As I've mentioned on my last couple of posts, when I started streaming, I had multiple devices connected. The reason was because I wanted to have options. Streaming was new to me, and I wasn't sure how many of these devices would remain, and what would go belly up.

I really liked Roku devices, and kept upgrading to the newest devices. For my main device, I had my original Roku XD|S, then a Roku 2 XS (bought it in summer 2011), then a Roku 3 (bought in spring 2013), and finally a Roku Ultra (late 2017). I also had other devices, some the same, others different from those, along the way on other TVs.

I had Apple TV devices, too. My main TV kept one available, and always the latest model. There were about as many different ones. I started with the Apple TV second generation in 2010, then a third generation device in 2012, a fourth generation in 2015, and a fifth generation in 2017. I haven't decided when I'll buy the new device that was just announced, as of this writing, but I expect I will get one.

TiVo eventually fell completely out of favor, at least with me. I started with a refurbished Series 2 in 2006, then upgraded to a Series 3 (also called the HD) in early 2009, and then a Premiere (Series 4) in 2012. I wasn't as eager to replace the devices as often, as they cost more.

By the time I was ready to upgrade to the Series 5 Roamio, they had actually replaced it with the Bold. That TiVo Bolt was the ugliest thing I'd ever seen, and I wasn't going to have something looking like that in my house. I did buy a Roamio OTA, as they were in the lineup longer, and I wanted something to record TV shows over the air, but then found I rarely used it. It turned out to be a waste of money, but not due to anything about the device, just my viewing habits had changed.

I'm not sure when I actually removed the TiVo devices. I stopped using them long before I removed them. As I had purchases lifetime service, it wasn't that big of a deal to leave it running; it didn't cost anything as I'd already sunk the money into it.

That meant that after a few years, I was down to using two device: Roku and Apple TV, right?

Nope. Another device made it's appearance. We'll look at that later.