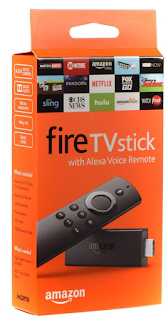 As I continued my journey through this Streaming Life, I used a variety of streaming devices over the years. Roku, Apple TV, TiVo, Simple TV, Chromecast, Mi Box, and more. The most notable one I haven't listed is Amazon's Fire TV devices. This doesn't mean I haven't used them. I have. I've purchased several Firesticks. Today, I still have one. In a box somewhere. The others I gave away.

Why did I stop using them? Simple. I don't like the Fire TV devices. They're all much slower than the other devices I've tried.

Well, that's not really true. The Simple TV device was quite slow. TiVo devices, at least the older devices I used, were kinda slow. And the first Roku HDMI Streaming Stick (model 3500) was slow and sluggish.

It was particularly because the Firestick and the Roku Stick 3500 were so slow and sluggish that I didn't think much of sticks overall. I just figured they were underpowered devices. When I got a Roku Stick 3600, it was a little better, but not much. That sealed it for me: sticks were trash.

Maybe it's because I always had top of the line Roku devices that I was comparing against. Apple TV held up well, of course, because Apple makes really good, and expensive, devices. Amazon's Firesticks were cheap, both in price and in quality, at least in my experience.

You may have a Firestick and love it. And if you do, great. You're happy with your purchase. But my experience is not that. I've always found the Fire TV devices to be underpowered and underperforming compared to my Roku devices.

The other thing I don't like about Firesticks isn't really Amazon's fault. Well, maybe it is, but I blame them less for it. Firesticks are the device of choice for pirate TV services. They're easy to crack in order to load software that will allow illegal streaming services to operate. I'm highly opposed to pirating content, and the fact that the devices are so often and so easily used for that purpose leaves a bad taste. If you're not sure what I'm talking about with illegal streaming services, I'll talk about them one day. Right now, it's just another reason, rightly or wrongly, for me to no like Firesticks.

Maybe I'll buy another Firestick one day and try again. But that day isn't today.