My device of choice 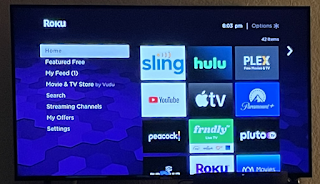 I've said time and again that I think anyone would do well choosing either Roku, Apple TV, Amazon Fire TV, or Chromecast With Google TV as a streaming device of choice.

My personal choice is Roku, but I am not exclusive to Roku. I have Apple TV devices connected to TVs, and I have Chromecast With Google TV on multiple TVs, but I have Roku on every TV.

Why do I have multiple devices? Well, as streaming gains in popularity, more and more of the problems with mainstream TV come to streaming. As I write this, Roku and Google are having a pissing contest about YouTube TV, and probably about YouTube also. At the moment, YouTube TV isn't available on Roku, unless you already have it installed.

This is much like the arguments with cable carriers and certain stations that happens from time to time. You know the deal, "Call your cable company and tell them to keep WPXLY-TV available" kind of thing. Now it's Roku and Google sending emails asking you to bombard the other one with emails and support posts threatening to take your ball and go home.

I'll rant more about that whole thing later. Right now, the point is just because a service or app you want is available on a device, there's no guarantee it will always be available. Amazon Fire TV has lost apps from time to time. Apple TV has too. And now Roku. All devices will be subject to this.

So, what's a person to do? Well, I have more than one device. I have two: Roku and Apple TV.

No, wait, I have three: Roku, Apple TV, and Google Chromecast.

Okay, I have four: Roku, Apple TV, Google Chromecast, and Amazon Fire TV. Yes, the Fire TV device is not connected, but it's available if I need it.

My device of choice? Pick any two.

Sure, start with a single device, if you're just starting your Streaming Life. But do pick up a secondary device some time. They're relatively cheap, and different family members may prefer different interfaces.

Whatever you pick, have a backup. Just in case.

By DBDukes - May 08, 2021
Email ThisBlogThis!Share to TwitterShare to FacebookShare to Pinterest