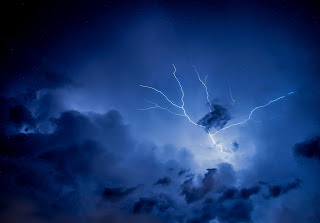 Earlier in the week, I mentioned about damage to some of my electronics from a storm this past weekend. I had found three items that were damaged, and had replaced two, with a third ordered.

Well, the third arrived and now things are back to normal. Almost.

Turns out there was a fourth item that was damaged. I mentioned that the primary switch on my network had gone out and I had replaced it. Well, in another room, there's a switch that had been damaged as well. It was a five port switch, and I use it in conjunction with my KVM switch. The KVM switch allows me to use a single keyboard, video monitor, and mouse on up to four computers. It doesn't also switch network connectivity. The five-port switch handles that. I have a single feed to the switch, and could run up to four devices on the network. That was damaged as well in the storm.

Turns out that two of the ports were bad, and three were good. My main Linux computer was running, as was my Windows device. However, some test project devices, particularly a Raspberry Pi, lost connectivity. I hadn't tested them, as the KVM switch made it difficult. However, the bad switch needed replacing, so I replaced it. I put in another 8-port switch, meaning I can connect the devices for the KVM switch, plus run the network printer on it, rather than have a direct feed for it. It keeps the number of cables running from one room to another down to just one now.

I'm still not sure if there is any more damage. I may find some, and will deal with it as I run across it.

If there is any more damage, it's not on devices I use regularly, so it hasn't been a big deal, at least not yet. I'm hoping that's the extent of the damage, and that my online and Streaming Life isn't interrupted any more than it already has been.

By DBDukes - August 12, 2022
Email ThisBlogThis!Share to TwitterShare to FacebookShare to Pinterest